Domestic Abuse & Finding Your HEA by Tempeste O'Riley, Author of Designs of Desire 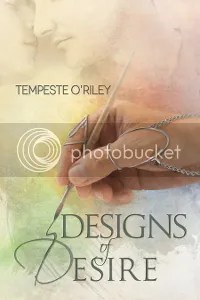 Artist James Bryant has forearm crutches in every color from rainbow for fun to sleek black for business. He even has a pair with more paint splatters than metal. After his family’s rejection and abuse from a man he thought loved him, James only just gets through the day by painting. He lives in constant fear that he’s not worthy of anything, let alone love.

As CEO of his company, Carrington Enterprises, Seth Burns is a take-charge kind of guy, and he is instantly smitten by the artist helping with his newest project. When he witnesses James suffer a panic attack, a protective instinct he never knew he had kicks in. He truly believes nothing is unobtainable—including James—if he’s willing to put in the time and effort.

James is shy and confused by Seth’s interest in him as a person. With Seth’s support, can he work through his fears to finally find the true love he deserves, or will someone finally land the crushing blow he won’t survive?

First I would like to thank Áine and the House Millar for hosting “Designs of Desire” and me, the author, today. In my novel, “Designs of Desire”, one of the MC’s has sadly suffered both domestic abuse and sexual assault—thankfully before the story starts, but for James, the victim, the abuse is never far away.

For me, one of the things I wanted to show in this story is that while abuse can destroy, or nearly destroy people, families, and more, there is the possibility that if you leave and are able to move on that maybe your true “prince” or “princess” will still be out there waiting for you.

James suffered abuse before he left home and when he became involved with someone later he again found himself being abused. He felt as far too often happens, that somehow it was his fault. Beyond that, many times if you are part of the GLBTQ community, there just aren’t the resources or the understanding to easily find the help you need. Even worse, there are often not the same legal protections and recognitions for GLBTQ survivors are there are for their Het counterparts.

For some, like James in “Designs of Desire”, finding your HEA is still very possible, but only if you survive. Finding help is the first step to getting out of a very dangerous situation before it’s too late. Organizations like The National Domestic Violence Hotline, Gay Men’s Domestic Violence Project, and the Northwest Network of Bi, Trans, Lesbian, and Gay Survivors of Abuse, are out there waiting and wanting to offer help…

I would like to invite everyone to become more knowledgeable about domestic abuse, with or without sexual assault combined, and to protect yourselves and your loved ones. No one should have to live under such condition, not even fictional characters!

Or text “HOTLINE” to 85944 to donate $10 to The National Domestic Violence Hotline.

Tempeste O’Riley is an out and proud omnisexual / bi-woman whose best friend growing up had the courage to do what she couldn’t–defy the hate and come out. He has been her hero ever since.

Tempe is a hopeless romantic that loves strong relationships and happily-ever-afters. Though new to writing M/M, she has done many things in her life, though writing has always drawn her back–no matter what else life has thrown her way. She counts her friends, family, and Muse as her greatest blessings in life. She lives in Wisconsin with her children, reading, writing, and enjoying life.