Interview with Johnny Ray, Author of “Her Honor’s Bodyguard”

Do first loves ever really die? While reunions can take many forms, there is always one question that has to be answered sooner or later—what happened?

Vance had always been extremely proud of Noella, and just because his life had been ruined, he saw no reason why she had to have the same faith. When his dad died, leaving him and his mother penniless, he dropped out of law school and ended his relationship with Noella, but in doing so, he stopped a scandal that could have ruined her family. These secrets he would never let her know. Ironically, years later, he would have never guessed she would be instrumental in ruining his career with the Tampa police force.

After Noella finished law school and started pursuing her goal of working up the ranks in judgeships, she never considered inviting another guy into her life. As such, when someone attempts to threaten her into vacating her seat on the bench, and by force if necessary, she knows of no one else she really trust as much as Vance, who now has a successful bodyguard and private detective business.

She knows that Vance might hate her for her part in having him dismissed from the police force, but what he will never know is that she actually saved him from going to prison. Additionally, she now thinks he was framed, and perhaps by the same people who are threatening her. She had to talk him into taking her on as a client . . . but would he agree to her request?

As the number of attacks on her life increases, Vance soon has no choice but to offer her his protection, and in spite of everything, when they see each other again their old attraction for each other returns. She wants the truth. He wants the truth. However, making the ultimate sacrifice is not always easy to understand, whether given or received. Ultimately . . . could they now trust each other with these secrets? While their lives depend on discovering the truth to their past, these truths are locked in deep secrets that could also destroy them.

Where were you born and where do you call home?

I was born in Texas, but now live in Florida. Yes, I have the fairytale job of writing on the beach and in many different coffee shops.

LOL, I grew up no far from where you now reside 🙂
What or who inspired you to write? And how long have you been writing?

I was inspired my many writer friends and I have been writing about ten years. I wrote as a ghostwriter for others first. I also have several pen names. I am now writing under my name, and what I really love—romantic thrillers.

When did you first consider yourself a writer?

When I saw the first book in print!

What is the name of your most recent book and if you had to sum it up in 30 or less words, what would you say?

Her Honor’s bodyguard is a romantic thriller, and involves a reunion that never should have ended the first time. This time, there will be no more secrets, but first he has to keep her alive.

I love reading the warnings on the blurbs for many books. If you could write a warning label for yourself as a person or an author, what would it say?

If you enjoy drinking coffee on the beach, you might end up being a character in one of my novels.

If you gave some of your characters an opportunity to speak for themselves, what would they say?

LOL, they would probably say they hate me for what I put them through, but this is what makes a story interesting—ordinary people in extraordinary situations.

What does your protagonist think about you? Would he or she want to hang out with you, the author?

I think so, since we share a story and we both take it personal.

Which character speaks the loudest, to you? Do any of them clamour to be heard over the others?

I often have a problem with minor characters who want to take over the story. It is hard to wait sometimes to write their own story later.

Have you based any of your characters on someone you know, or real events in your own life?

I have used pits and piece of my life in the stories; it is hard to not do so.

Do you have a specific writing style?

I think all writers do. I don’t like being overly wordy, but love to give enough details to anchor the reader in the story.

How did you come up with the title?

This was hard. My heroine is a judge who lost the love her life years ago. He hero now trusts no one, and it is a battle to regain his trust.

Is there a message in your novel that you want readers to grasp?

Just because you think you are doing the right thing for someone else, ask to make sure.

Sadly, this is a lesson that too often gets missed.
Do you have plans for a new book? Is this book part of a series?

I have many completed books, and will be releasing them this year as quickly as they are edited. To stay in the loop, I suggest you sign up for my newsletter on my blog www.sirjohn.us

Where do you see yourself in five (5) years?

I hope to have many books published by then and hopefully several turned into films.

If you could live anywhere in the world, where would it be?

I am thinking seriously of moving to Milano, Italy

Is there an Author that you would really like to meet?

I think I have met most authors at conferences. The one I have not is Jack Higgins, which I might be able to this year.

I love meeting other authors! Good luck on tracking down Jack.
Do you prefer ebooks, paperbacks or hardcover?

Are you a self published (Indie) Author or big trad published?

I self publish under my name, but have used a pen name for other publishers

How do you market/promote your books?

I am all over the internet, and on twitter I have four accounts with a total of over 75,000 followers.

What do you think makes a book a really good/bestseller?

Connecting with the reader. `

What do you do to unwind and relax?

I love a good glass of wine, and I write on the beach, so I can go for a quick swim anytime.

Do you have any advice for other writers?

Make friends, of both other writers and readers. In other words, make friends rather than pages; you will be happier in the long run.

What is the best advice that you have ever been given when it comes to writing?

Janet Evanovich told me to keep my butt in the chair and write, and write and write. LOL

Do you write under a pen name?

Several Beth Gray is one you might recognize. As a ghostwriter, I am under contract not to say.

Both, but prefer coffee in the morning

MMM . . .
Laptop or desktop for writing?

Where and when do you prefer to do your writing?

I write around the clock, but go to the beach and write every morning.

One of your favourite quotes –

When the going gets tough, the tough get going.

What is a movie or TV show
that you watched recently and really enjoyed?

Dancing with the stars 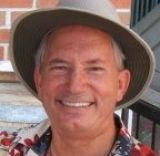 Johnny has a passion, a thirst, for life and adventure that he loves to share with his readers. He has owned and operated several real estate companies, several insurance companies and a stock brokerage company.

He lives in St Petersburg, Florida where he works full time as a writer. He belongs to the Florida Writer Association, the Romantic Writers of America, the Mystery Writers Association, and can be found attending various national conventions as well as supporting several local writing groups. His novel THE SALSA CONNECTION won the Royal Palm Literary award for best thriller.